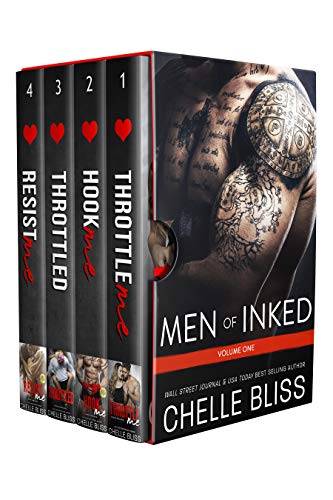 Join the Gallo siblings as their lives are forever turned upside down by irresistible passion and unexpected love.
"One of the hottest books of all-time!" -Bookbub Reviewers
THROTTLE ME - Men of Inked #1
Suzy's a control freak and has her life mapped out - work hard, find a man with a stable job, and live happily ever after. She's content with the status quo, but her plan comes to a screeching halt when he enters her life and turns it upside down.

City gave up on love when his heart was crushed in college, preferring to be the typical bachelor. He spends his nights hopping from one bed to another and his days working at his family tattoo shop, Inked. A chance encounter on a dark road makes him question what he had sworn off forever - a relationship.

A night of passion and lust causes them to question everything. Is City the knight in shining armor to the damsel in distress? Can their relationship survive when a fantasy falls apart and a secret comes out that changes everything?
HOOK ME - Men of Inked #2
Michael Gallo found his calling in life - he wants to kick ass. He works at Inked as a piercer, but spends his mornings training and dreaming of winning a championship. Michael is the road to achieving his goal when a chance encounter alters his world forever. The title is no longer enough - he must capture the woman of his dreams.

Dr. Mia Greco is dedicated to saving lives and helping those less fortunate. She doesn't have time to meet Mr. Right with her busy schedule. She buries herself in her work and helping humanity. Fate steps in and sweeps the carpet out from under her. She tries to deny the pull to him, a man that uses his fists for gain, but the universe won't let her walk away so easy and Michael isn't one to take no for an answer.

He has a secret that may rip them apart. There are forces bigger than them at work; drawing them in and making their worlds collide - not letting either one of them walk away.
THROTTLED (Novella) - Men of Inked #2.5
She’s about to become his – Mrs. Joseph Gallo. All she wants is to be his, but his possessiveness days before the wedding has her questioning the reality of a happily ever after. He’s not easy. He’s territorial and doesn’t share well with others. City’s staking his claim, making Suzy his forever. Their future teeters precariously on the cliff of matrimonial bliss. Will their love survive his alpha nature or will it all unravel before she can say ‘I do’.
RESIST ME - Men of Inked #3
Izzy Gallo has never been described as a member of the weaker sex. She's a woman who doesn't take sh*t from anyone. Growing up with four older overprotective brothers has hardened her, making her a force to be reckoned with.

Against the wishes of her two brothers, Izzy takes a weekend trip to Bike Week in Daytona, turning her world upside down.

Over her head, in a world she doesn't understand, there's only one man who can save her.
James Caldo has dedicated his life to protect and serve as a member of theDEA. He's cocky, overbearing, and doesn't take no for an answer - the Gallo men have nothing on him.

When their paths cross, James makes Izzy question everything she believes about completely surrendering to the opposite sex.

Does James have what it takes to overpower the headstrong Izzy, capturing her heart forever?

James’s and Izzy’s story is fantastic. They have the best chemistry and banter. I feel like we only got a tip of their journey, which I guess is the point with interlacing series books. At least with Joe and Suzy’s book I felt like some of their story was resolved and they were moving onto the next phase of their relationship. I just feel like James and Izzy never really started fully.
Love the Gallo’s though and I will definitely still read all of the Gallo’s books.

Ms.Bliss did good with the Gallo siblings. Family loving hard,and men loving their women.Caveman style and protection . Keep up the good read

This is the first part of Men of Inked the boxed set and I enjoyed it a lot. It was very steamy and an I loved the characters. It was lots of fun reading this set and I am looking forward to more by this author.

One of the best series I've started in a long time. Starting the 4th book of this series now! Found this author and series via Tik Tok and am very pleased. Can't wait to read more!

Good, could be better!

Note: Recommend for readers 18+ due to language and sex (lots of sex)

This is my first read from this author and it held my interest for the most of the series.

The series is about the Gallo family. There is Pa and Ma and their five children, Joseph, Michael, Thomas, Anthony and Izzy. Will explain more in the book related reviews on this colorful cast of characters. The Gallo family are sweet and have dinner together every Sunday, but man can they love fiercely! All of the children are owners of a vineyard in Italy and Inked – a tattoo parlor.

Tons of steamy scenes…and I do mean TONS! Don’t get me wrong, I do enjoy reading these delicious scenes, but there were so many that I felt they were repetitive and didn’t really add to or move the storylines along. Would have maybe like to more of a storyline and some character development (especially in Izzy)!

I liked this story of City being a big bad biker that really is a huge a** teddy bear that likes to cuddle after sex. Then you have cute and innocent Suzy wanting to break out the sex kitten that she is hiding! These two were perfect for each other. The only downside was that the sex seemed very repetitive – could have perhaps done a few fade-to-black scenes.

This book was my favorite out of the series so far! The best part you ask - the back and forth between these two was just fantastic! After “meeting” for the third time they both realized that the initial spark/instant connection is still humming right along. I enjoyed their push – pull relationship whether it was inside the bedroom or out of it! The only downside to their story was Michael’s stalker. I felt like that part of the story was just left hanging and for the love of everything holy – Michael pop that damn question already!

THROTTLED (Novella) - Men of Inked #2.5
This is a quick, sweet novella in regards to the wedding of City and Suzy. Ms. Bliss probably could have tossed in the book one IF the sex scenes were shortened a bit or a fade to black version. Not sure it was really needed. Izzy certainly does not help matters at all in regards to this storyline.

Izzy – hands down – has been the most annoying character I have ever read! I could not stand her in any of the previous stories. She certainly acted like a spoiled rich kid that did whatever the hell she wanted; consequences be damned. Like the stripper at Suzy's bachelorette party – even after she promised Suzy and City both – that she would not do it. Still did it, created havoc and then nothing. James Caldo seemed to be a good guy. Wasn’t willing to put up with Izzy and her crap. Someone needed to as it certainly wasn’t her four brothers and parents.
Skimmed most of this story as I didn’t really care enough about her character to spend my time reading it. Then it ended on a cliffhanger!

These books makes me want to get more ink. The caveman fell to these men is not to over the top. An the women are smart and tuff.

Out of this world the best Family story. Hot,sexy men and one sassy sister

OMG. The Gallo's are the Best. The men are hot and sexy and Izzy is a mouthy strong women.

Love the Gallo Brothers! They give new meaning to hot, sexy alphas but they are tender and living at the same time. Love how the family dynamic plays such a big part of the stories. Must read!

Absolutely loved these books! The books had a great story line and just the right amount of smut! Only dislike was the way each book ended. Seemed not to have very good conclusions; HOWEVER, they also didn’t leave you completely hanging.

This series had everything I wanted. The Gallo's are loyal, loving, and passionate. The progression of the plots make sense. And while there is a great deal of sex, it doesn't come across as gratuitous. The final book in the series, the Izzy/James story, is a tiny bit rougher on the sex, just in case that isn't your thing.

The Christmas Truce: A Novella