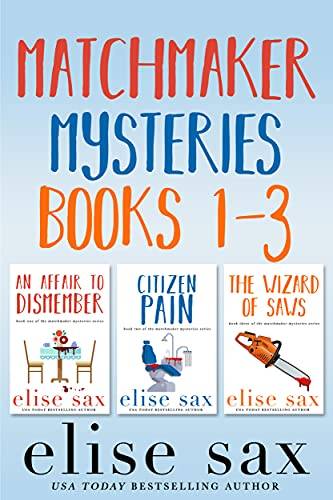 "Fans of laugh-out-loud romantic suspense will enjoy this new author as she joins the ranks of Janet Evanovich, Katie MacAllister, and Jennifer Crusie."-Booklist, on An Affair to Dismember

In this boxset, you'll laugh out loud with Gladie through the first three books in the Matchmaker Mysteries series: An Affair to Dismember, Citizen Pain, and The Wizard of Saws. Come find out just what kind of trouble Gladie gets herself into.

An Affair to Dismember:
Three months has been Gladie Burger's limit when it comes to staying in one place. That's why Gladie is more than a little skeptical when her Grandma Zelda-who is more than a little psychic-- recruits her into the family's matchmaking business in the quaint small town of Cannes, California. What's more, Gladie is also highly unqualified, having a terrible track record with romance. Still, Zelda is convinced that her granddaughter has her clairvoyant "gift." But when the going gets tough, Gladie wonders if this gift has a return policy.*When Zelda's neighbor drops dead in his kitchen, Gladie is swept into his bizarre family's drama. Despite warnings from the (distractingly gorgeous) chief of police to steer clear of his investigation,

Gladie is out to prove that her neighbor's death was murder. It's not too long before she's in way over her head-with the hunky police chief, a dysfunctional family full of possible killers, and yet another mysterious and handsome man, whose attentions she's unable to ignore. Gladie is clearly being pursued-either by true love or by a murderer. Who will catch her first?

Since joining the family matchmaking business run by her eccentric and psychic Grandma Zelda, Gladie is always looking for love. But when an unbearable toothache knocks her out of commission and into the dentist's chair, she prays only for relief. No such luck. Emerging from an anesthetic haze, Gladie awakes to find that not only is her tooth still throbbing, but her dentist is dead--and the lead suspect in the murder, office receptionist Belinda, just so happens to be Gladie's first real client. Now it's up to Gladie to find Belinda a man and keep her from being locked up behind bars.

As if that weren't enough distraction, two gorgeous men are vying for Gladie's attention: Spencer, the playboy chief of police, and Holden, Gladie's secretive, gorgeously muscled neighbor. Still, Gladie's not complaining about having a helping hand or two when the case leads her to a dangerously bizarre cult. She may have met her match--and if she's not careful, it could be her last.

The Wizard of Saws:
Five months have passed since Gladie Burger came to Cannes, California, to join her eccentric Grandma Zelda in the family matchmaking business, and Gladie is quickly mastering the rules of attraction. Her latest fix-up is still going strong and Gladie's bank account is back in the black--until a rival matchmaker arrives in town and has both Gladie and Zelda seeing red.

Not only is self-proclaimed psychic Luanda Laughing-Eagle stealing Grandma Zelda's clients, but Zelda is convinced that Luanda's ESP is total BS. She tasks Gladie with exposing Luanda as a fraud, but Gladie's attention is diverted when murder comes a-calling. Spencer Bolton, the gorgeous chief of police and Gladie's on-again, off-again flame, wants her to stay out of the investigation--and away from the deliciously chiseled detective who also aims to win Gladie's heart. But the one thing Gladie's learned is that in business, love and murder . . . it's always personal.