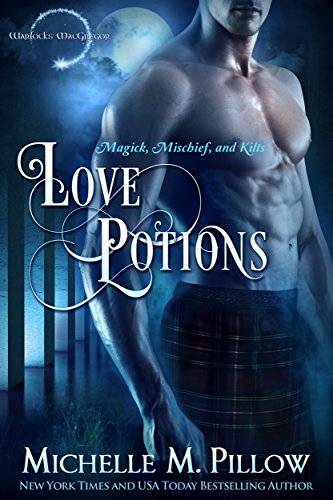 A little magical mischief never hurt anyone until a love potion goes terribly wrong.Magic, Mischief, and Kilts! A modern-day Scottish paranormal romance by NYT Bestselling Author Michelle M. Pillow."A mesmerizing and magical read!"
From the Highlands of Scotland to the valleys of Wisconsin...Erik MacGregor is from a line of ancient (and mischievous) Scottish warlocks. He isn’t looking for love. After centuries of bachelorhood, it’s not even a consideration… until he moves in next door to Lydia Barratt. It’s clear the beauty wants nothing to do with him, but he’s drawn to her and determined to win her over. The last thing Lydia needs is an alpha male type meddling in her private life. Just because he’s gorgeous, wealthy, and totally rocks a kilt doesn’t mean she’s going to fall for his seductive charms. Humans aren't supposed to know about his family's magic or the fact he's a cat shifter. It's better if mortals don't know the paranormal exists. But when a family prank goes terribly wrong, causing Erik to succumb to a love potion, Lydia becomes the target of his sudden and embarrassingly obsessive behavior. They’ll have to find a way to pull Erik out of the spell fast when it becomes clear that Lydia has more than a lovesick warlock to worry about.
2015 Virginia Romance Writers HOLT Medallion Award of Merit recipient for outstanding literary fiction in Paranormal

Warning: Contains yummy, hot, mischievous MacGregors who may or may not be wielding love potion magic in an effort to prank their older brother, and who are almost certainly up to no good on their quest to find true love.
What critics are saying...

5 Stars! "RECOMMENDED READ! "Peeps...this is the FUNNIEST book that I've read this year. I mean rolling on the couch, tears streaming, almost wetting my pants funny. The dialogue between every character is funny and perfect. You will have a smile on your face from the first page to the last page." - Harlie's Books Review
Top Pick - Love Reading Romance
5 Stars! "I loved this one so much I read it once for the review, and again simply because it's such a great book! ...mystery, intrigue, and a little home grown mischief ... WELL. WORTH. IT! I'm going to run off and read it again because I loved it soo much!"
​2015 Virginia Romance Writers HOLT Medallion Award of Merit