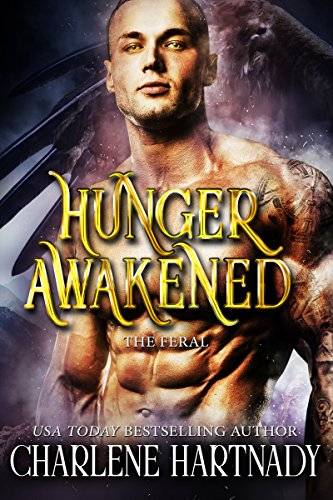 The Feral. Self-appointed rulers of all. Strong. Majestic. The most badass of all the species, and yet, the most vulnerable.

Their own females died many moons ago from the dreaded clutch sickness. Desperate and desolate, they watch as the other shifters take human females as mates. They are breeding successfully with them too.

Surely if the others can do it, they can too? They must if they are to survive. Human females are afraid of them, not interested in the least.

It is clear that The Feral must first learn the ways of the humans. The problem is that they have kept to themselves for too long. They don’t have the slightest clue where to start.

Several keythong are appointed to infiltrate human society. To learn what they can. These particular males are some of those who lost their mates. They are therefore destined to spend the rest of their days alone. Females no longer tempt them, which makes them perfect for this mission. As long as they stick to the plan and the job at hand, what can go wrong?

Talon arrives in the big city. It’s bright, loud and packed with humans. By scale and by feather, he has no idea where to start. The future of his species rests firmly on his shoulders. Clueless, he enlists the services of a Love Doctor who promises to teach him everything he needs to know about the opposite sex.

Vicky is desperate. Ever since her husband ran off with another woman, her business has been in the toilet. Who wants to take advice on love from someone who couldn’t keep her own husband happy? No one, that’s who. At least, no one in their right mind. On the verge of bankruptcy, a very gorgeous, nut-job of a guy walks through her door. He claims not to be human. Yeah right! Her first instinct is to kick him out. Then he hands her a suitcase full of money. Cash - and lots of it. How can she refuse to teach him everything she knows about women, about love? She can’t, that’s how.

The female laughs at him when he tells her who he is and why he is there. It takes some convincing to get her to agree to help him. She proves to be highly knowledgeable and skilled in the ways of human females. His mate has long since died and yet he is tied to her as if she were flesh and blood. His heart, his body, and his soul belong only to her. Why then does this tiny human doctor tempt him so? How is it that his hunger has reawakened? This has never happened before in the history of The Feral. It is wrong, and he must fight against it with every fiber of his being.

Hard to get intk

Talon starts out so clueless it makes you wonder how he knows he needs money. The human female is supposed to teach him how to function in human society. I like shifters but it was very difficult for me to like either of the main characters.

the whole book is about the H's guilt about being attracted to another woman after his wife died, and the h's ex. No world building...No real shifter...so boring....tried this author before, won't again.

Four Ferals who have lost their mates due to a mysterious clutch disease leave their country in an effort to learn more about human women. It is their hope that the females will willingly join with unmated Ferals and be able to repopulate their numbers. Each male heads out to learn for themselves if this is possible.
Talon meets up with Vicky who is a love psychologist and he offers her a large amount of money to teach him human ways, how to properly dress and how to approach women correctly.
Ferals mate for life, and it's been ten years since his mate died along with her clutch of eggs from the dreaded disease. He still mourns her and feels guilty and humiliated when sexual urges begin to appear when he and Vicky are together.
Vicky is recovering from a eight-year-old failed marriage and a cheating husband who is now married to another woman who is expecting a child of his.
Although claiming to be through with all men, Vicky fights the attraction she begins to feel for Talon, and Talon hides any feelings he has for Vicky out of loyalty towards his fallen mate.
My 3.5 rating enters because although it's a good plot and well written, it lags in the middle for several chapters while the couple go back and forth, on and on with feelings unrequited until nearly the end of the book.

This book is a wonderful read. It’s warm, funny, and sexy. I’m ready for the next book in the series.

This was a great book it was well worth reading. I would highly recommend it. Just the right amount of heat and lots of snark with a happy ever after.

Okay I did not think I was going to like this series. Boy oh boy was I wrong. This books was so good. I felt so bad for Talon. He lost his first mate and was so confused, which made him act like a jerk. Then he finally figured things out. I have read so many romance books and this one is easily in my top 5 favorite books.

Refreshingly innocent main character , a shifter male with a lot to learn , presents readers with some laughs as he learns about not standing out so that he can attract a female.
.