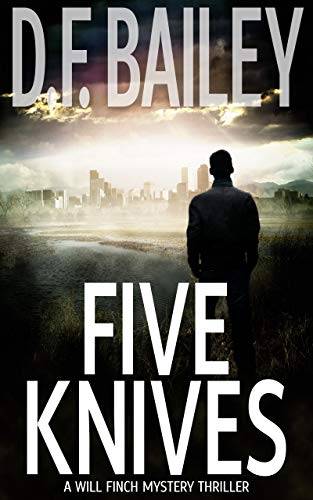 FIVE KNIVES welds the intensity of Jack Bauer’s “24” to the scorching heat of THE GIRL WHO KICKED THE HORNET’S NEST.

When a man plummets to his death from an apartment tower, Will Finch’s shock soon becomes a nightmare. As he studies the open windows above the corpse, Finch notices a lamp blinking erratically behind a drawn curtain on the eleventh floor.

When he investigates the distress signal, Finch discovers a woman handcuffed to a bedpost. Over the following week, he uncovers a conspiracy that ties the murder to a series of bombshells. The victim’s bankruptcy. A global stock fraud. A murder spree that began in Baghdad and is now haunting the citizens of San Francisco. Is this the work of a serial killer, a copycat — or both?

But before he can file his report for The San Francisco Post, Finch’s leads evaporate. Within days, three victims are dead. Does a pattern of five knife wounds provide a clue? Can he unravel the mystery before he — and his fiancée — are caught up in the web of murder?

Five Knives is the prequel thriller in the Will Finch crime series — a novel that opens on the first day of Will Finch’s journalism career. Everything that Finch learns about crime reporting begins with Five Knives.

And if you like those writers, then I invite you to have a look at my crime series. You can buy them all on Amazon, or pick up a free / discounted novel at my website, dfbailey.com.

Writing crime fiction isn't always easy, but it's always a thrill. When you read my novels I hope you'll share the buzz, the excitement and the adrenaline rush with me.

Like all writers, I love readers who enjoy my books, especially those who are kind enough to leave a review. Hopefully, you will, too.

THE SECRET TO FINDING YOUR CHRISTIAN SPOUSE: A Biblical Approach to Marriage

Seduced by an Irresistible Lady: A Historical Regency Romance Book