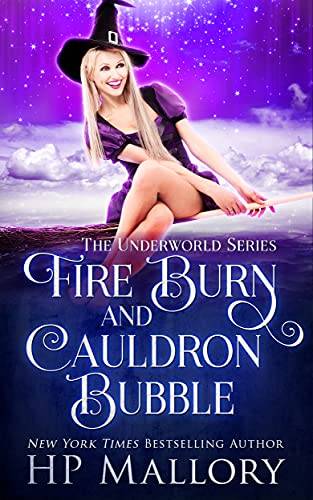 First in the New York Times bestselling Underworld Series! If you like your books steamy and you appreciate a good witch, warlock, and vampire romance triangle, then read on!

Life isn’t bad for psychic Jolie Wilkins. True, she doesn’t have a love life to speak of, but she has a cute house in the suburbs of Los Angeles, a cat, and a quirky best friend.

Enter Rand Balfour, a sinfully attractive warlock who insists she’s a witch and who just might turn her life upside down. Rand hires her to help him solve a mystery regarding the death of his client who also happens to be a ghost. Jolie not only uncovers the cause of the ghost’s demise but, in the process, she brings him back to life...

Word of Jolie’s incredible ability to bring back the dead spreads like wildfire, putting her at the top of the Underworld’s most wanted list. Consequently, she finds herself at the center of a custody battle between a villainous witch, a dangerous but oh-so-sexy vampire, and her warlock boss, Rand.
Paranormal Vampire Romance Paranormal Witches & Wizards Romance Paranormal Werewolves & Shifters Romance

Not a favorite. Will not continue this series. Surprised that it wasn't up to the standards of H. P. Mallory other books I have read.

I really enjoyed this book and the fun take on paranormal fun and magical characters. Can't wait to see what happens next. Highly recommended.

Jolie goes through the many stages of finding out she's "witch," learning her powers, and lusting over almost every Warlock, Vampire, Fae King & Werewolf she runs into. She does this with inane and repeating internal dialog that's redundant and redundant. IF this (Audible version) book was 8 hours instead of 13, it would be vastly improved. But hey, if you have the patience for it, there are some fun, funny moments, and several very slow-burn romances.

So much build up and story, but seems to not move on enough. Need to read next in the series to go from here.

This was the first book of yours that I have read but it was not something that I would usually read.