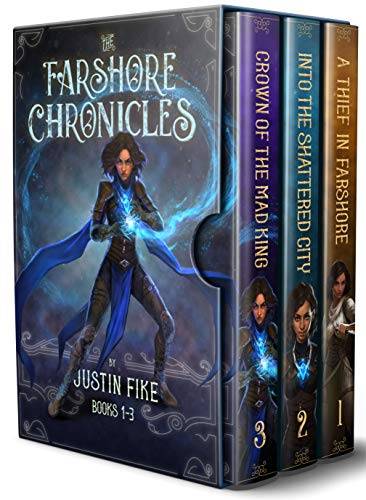 A quick-witted thief is sentenced to a faraway land of magic, myths, and monsters.

"The Hunger Games meets Gladiator. Justin Fike is a fantastic storyteller! The world building, the characters, the action! It was an epic journey!" - ★★★★★ Amazon Review

Charity is a thief who survived Byzantia's deadly streets by thinking fast and running faster... Until a heist gone wrong saw her imprisoned on a ship sailing to the far side of the world.

Farshore, the Emperor's First Colony across the great sea, is humanity's lone outpost in a land inhabited by monsters, wild magic, and races from legend.
Turns out, myths are just as deadly as a knife in the dark.

A quick temper and a sharp tongue soon earn her a deadly quest with a group of outcasts who would readily kill each other if not for the threat hanging over their heads. Their only hope of survival lies in working together.

When their quest unleashes an ancient king bent on conquest, Charity must adapt and learn to trust her new companions if she hopes to stop him. If she fails, two worlds will fall with her.

The Farshore Chronicles is fast-paced Sword and Sorcery in the tradition of RA Salvatore, David Eddings, and Mercedes Lackey. If you enjoy action, adventure, humor, and compelling characters set in a magical world, you will love this fantasy series.
Download and embark on your whirlwind adventure.

Included in this bundle:
1. A Thief in Farshore
2. Into the Shattered City
3. Crown of the Mad King

LET YOUR IMAGINATION RUN WILD
This is a great series with 3 more after this so plenty to keep you occupied.
It is good to forget about the shit Covid ,Climate change etc and go in a world away from it all.
Great characters ,good plot and a fast read.
All the characters make the story quite believable and exciting.
Starts with Charity the main character a thief who got caught by the wrong person then sent to fight the inhuman beings in a arena.
Charity often got into trouble as she would say things without thinking about it first.
This story was told so well you can visualize being their in person, into a world with humans and Mythical beings.
The series will keep you reading well into the small hours as the books are hard to put down.
Then after this there is another 3 books....fantastic..

A sleigh ride down Ajax

Good plot line that has enough challenges to keep the pages turning. Character development grows in detail and depth with each new chapter. Love it being a collection of many book to look forward to.

It's the Little Things...

This series held me through to the end. But it's the little things that mean a lot, i.e., in book 2, Into the Shattered City, chapter 1, last sentence; ""I had to admit that the odds of that happening were dropping by the second." First sentence chapter one; I had to admit that the little terrors had picked a good spot for an ambush." Either or both of these add-ins could have been dropped without doing harm to the storytelling.

I had noticed other such misuse of verbiage, but this one was extra distracting.

Ah! Always the fly in the soup. There were several words used incorrectly or spelled badly. As a writer, I know how difficult it is to catch those little errors such as lead for led or then for than.

Charity’s adventures continue and it looks like she is in trouble again.

How does Charity and her friends manage to find so much trouble to fall her way? Is 6th is he fate or kismet I really don’t understand the workings of the strings of fate that are controlling her life but it surly has a path laid out for her.