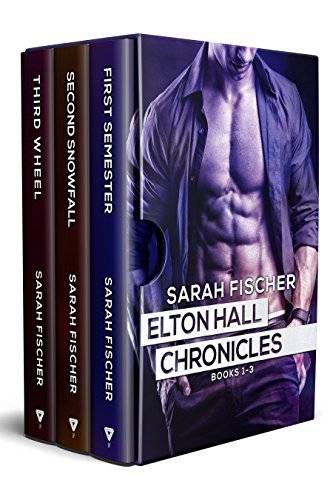 FIRST SEMESTER - BOOK #1Violet Carrington is a freshman at Elton Hall University, but she’s about to get more than just her degree…Throwing herself into the insanity of college life, Violet makes new friends and even catches the eye of a handsome guy. Everything is as it should be, until one night out she crosses paths with a mysterious, sinfully attractive man. Not only does he manage to ignite a burning desire deep inside her, he also happens to be her new, off-limits college professor.Professor David Berneli is only visiting Elton Hall, but a lot can happen in a year…Everyone knows any personal relationship between professor and student is strictly prohibited. But somewhere in between lectures and after school events, Violet manages to dazzle him. She not only challenges David at every turn, but also tempts his every desire. No matter how hard they try to ignore the crackle of sexual tension between them, a few furtive glances quickly turn into clandestine meetings in his office.By giving in to temptation, Violet and David fall deeper down the rabbit hole…As the semester ticks on, Violet begins to question not only the whirlwind affair that threatens to consume them both, but David’s desires as well. If he’s not willing to risk everything for her, she’ll have no choice but to leave the comfort of his arms without looking back.Before any decision can be made, a looming threat comes out of the shadows, putting her and the passionate relationship she has with her professor in danger.Now Violet must fight for her own life, and for the one she wants to spend it with...SECOND SNOWFALL - BOOK #2Last semester, Annabelle fell in love. There are just two problems. Jason is her best friend…and he’s already taken.Refusing to break up a relationship, Annabelle resigns to love him from afar—until a certain hot firefighter walks into her life.Kingsley is the perfect catch. Rich, attractive, with muscles to boot, and he only has eyes for Annabelle. But things get complicated when he clashes with Jason.With tensions running high and emotions spiraling out of control, Annabelle finds herself torn between her love for Jason, and her new desire for Kingsley.The longer Annabelle tries to hold on to both men, the more she gets tangled up in a web of lies, secrets, and chilling revelations.Now, things have gotten worse and Annabelle must do something—before things get ugly…THIRD WHEEL - BOOK #3Christie Peters has her whole life mapped out for her.She plans to marry her boyfriend. Pose for wedding pictures at the Plaza. Then take care of her future children while her husband fights for their country. She would be the perfect trophy wife…or not.But then a new man walks into her life, and Christie takes a temporary break from perfection. Shane introduces her to a world filled with possibilities and unexplainable passion. She starts to doubt every decision she’s ever made.But the deeper Christie falls into Shane’s world of underground, illegal street racing, her perfect world begins to crumble around her, and things aren’t as simple as they once seemed.Christie has to choose. Is she willing to settle for safety and security? Because one thing is certain—if she decides to walk on the wild side, there’s no going back.

I found this amazing series through twitter of all places! It's a fantastic series centered around three college girls and the real life troubles they face. For $0.99 getting these three books was amazing for when I was traveling over Thanksgiving weekend. I'll be sure to pass this amazing series onto all my friends. They're perfect for any and all lovers of romance! Almost wished the characters stayed in school!

Arrange Me: a married-at-first-sight romance