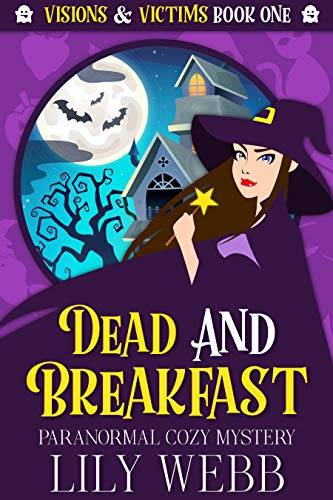 You made your bed, now die in it…

Bored barista Selena Smith’s life is so normal it hurts — until an eccentric old woman claiming to be her aunt appears in the cafe. She insists on Selena coming to work at the Kindred Spirits Inn, her remote bed-and-breakfast. The only problem? The inn and its guests are anything but normal.

When Selena arrives at Kindred Spirits, she discovers magic radiating from the inn's every surface, paranormal patrons prowling its halls, and an inexplicable new ability to see flashes of the past.

But Selena’s newfound powers aren't spiriting away all the guests. Someone — or something — lurking in Kindred Spirits is desperate to exorcise her from the inn before she exposes all the skeletons hanging in the closet of Room 666.

Will Selena’s psychic sleuthing lead her to the truth? Or will the killer make sure she checks out for good?

Dead and Breakfast is the first book in the Visions and Victims series of paranormal cozy mysteries. If haunted hotels, visceral visions, and supernatural suspects get your wand waving, then you’re sure to fall under the spell of this new spinoff series that expands Lily Webb's magical universe.

Shadows in the Water: A Lou Thorne Thriller

The Duke and the Spitfire