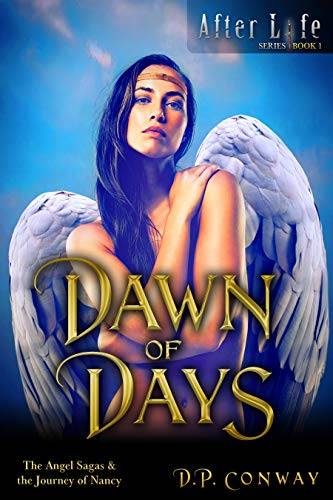 DAWN OF DAYS begins the Angel Sagas and is the 1st book in the After Life series.The greatest of Archangels is not content. He wants more. Lured by jealousy and sensual forces of darkness, he must choose his path, a choice that will decide the fate of all.  Only love can sway him, but will it?Welcome to the Angel Sagas.Welcome to the Dawn of Days.Part Two of Dawn of Days tells the story of the After Life Journey of Nancy.A woman with Alzheimer’s who lived through the great depression and lost her only son in World War II, is trapped in an endless daily search for her husband. One day she meets a stranger and through their meeting her life takes a turn she could have only imagined.
What is the After Life Series?An epic story of Lords, Angels, Dark Angels, and Humans, there are two types of stories in the series: The Angel Sagas and the After Life Journeys.THE ANGEL SAGAS tells the story of Creation from the beginning of time to the coming end of time. Long before the earth, or Adam and Eve were created, the Lords created the male and female Angels, and the Heavens where they were supposed to live in harmony.  But when the Dark Lord rises and discontent is sown, the dreams of the Lords begin to fall apart, and everyone must choose a side. The Archangel Sagas spans all 15 books, but in books 1 through 12, the exciting After Life Journeys of our Human characters are also presented.THE AFTER LIFE JOURNEYS dramatically tell individual tales of 15 modern-day people’s lives and journeys to the After Life. There is an autistic young man, a mob lawyer, a girl with Rett’s disease, a middle-aged divorcee, a rigid Baptist preacher, a U.S. Senator, a Muslim American soldier, a woman who suffers abuse as a child, and even an avowed atheist who survived the shark-infested waters after the sinking of the U.S.S. Indianapolis.Each person lives life the best they can, but suddenly, and often unexpectedly, death crashes into their plans. Many never get to say goodbye or attain the hopes and dreams they often desperately desired.Some are cautionary tales, like the mob lawyer’s story. Even the 9/11 hijackers are addressed in book 12, because the series is not only about Heaven but also about Hell, and about a place in between, for those who don’t quite fit into Heaven or Hell.  The series is about second chances, and life on the other side, a life we all someday want.All 15 human stories converge in the last three books of the series, as the Angels, the Heavens, and the Earth race toward their destiny, and all are hurled toward the final showdown between good and evil.Books in the After Life Series should be read in order.

The Haunting of Beckett Mansion

From Dust and Ashes: A WWII Historical Fiction Series

Case of the One-Eyed Tiger