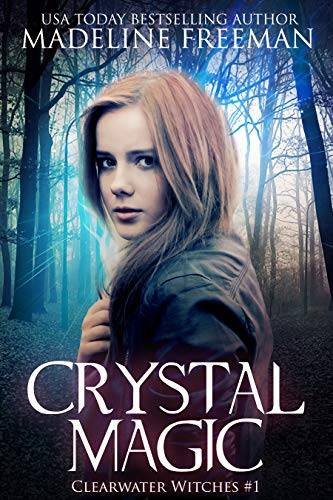 Krissa Barnette has a secret.

When she’s upset, she can hear what other people are thinking. And when she’s overwhelmed, things explode.

A move to Clearwater, Michigan, gives her the chance to reinvent herself, but a fresh start is further away than she realizes. Her abilities magnify—making her a target for Crystal Jamison and the town’s circle of witches.

Even with new friends at her side, Krissa can’t ignore the witches’ magnetic pull—especially when a strange illness rips through the town.

If Krissa doesn’t push her fears aside, she could lose more than control. Learning to wield magic could consume her. Ignoring her gift could destroy the world.

Crystal Magic is the riveting first tale in the Clearwater Witches series of magical YA novels. This spellbinding tale will hook you from the start and keep you turning pages all night long. If you like bewitching characters, first loves, and strong female leads, then you’ll love this thrilling series!

This is a story that pulls you in and you don't want to stop reading. I read the first book in a single.afternoon. I couldn't put it down. Now I'm waiting for my paycheck to get the rest of this series.

reminiscent of high-school Magick and friends

I enjoyed this book. great for young adults, but also old adults. it doesn't bother me that it ends with a cliffhanger. that just makes me yearn for the next part in the series. the characters felt just like high school for me and that was a lot of reminiscing. I loved the town and jodi's shop. good book

Another fun, self-published YA novel, CRYSTAL MAGIC just brushed the edges of teens using magic, but played with time more, which I liked. The plot took it’s time developing which, considering Kristyl’s history, I can kind of understand. Relegated to the bullied corners of the hallways, Kristyl never really had any friends and adding in the weird things that happened when she was around, she got the freak stamp too. When she moves to a new town, people start seeing her for her and she revels in it. It was kind of nice watching these friendships play out, but I was with Kristyl in kind of flinching with the hit yet to come. But it never came. A nice departure from more typical YA fare.

The illness that threatens her aunt doesn’t really come up until about 3/4 of the way into the book, which is where the majority of the action happens. Honestly I was getting to the last couple of chapters wondering how the author was going to end it because, you know. I was running out of pages. But I liked how it ended. The basic storyline finished, but it immediately opened up a new, and very interesting one. Interesting that it has me really excited to read the next book in the series.

Kristyl comes with baggage and she kind of wears that throughout the story, and I don’t blame her for that. I liked watching her grow as someone who’s apprehensive about the world around her into someone who’s comfortable with how she exists in it. She’s resilient and stronger than she gives herself credit for, even excluding the magic she has. I was kind of sad for her at the end with the way everything turned out, but I’m looking forward to see how things are . . . fixed, shall we say.

A well-written book, CRYSTAL MAGIC was a pleasant surprise in the world of self-published YA. Looks like I pick better books for myself than if I just let people come to me so we’ll see how long that particular trend lasts! If you’re into magic, time play (I won’t call it time travel because it’s . . . not really that), and a super slow burn romance (which I can totally appreciate and doesn’t overwhelm the plot), then you’ll like this book.

So fun to read.

I loved reading this book and learning all about Krissa. This book was hard to put down and was interesting all the way through it. I couldn’t wait to turn the page to see what was going to happen next. I’m excited to find out what happens in the second book.

I enjoyed this book. You could not foretell what will happen next.

This series is a great read!

The story pulls you in and keeps you interested. The characters are believable and relatable. The storyline seems a bit canned, too much like others and like a tv series. There are quite a few editing issues but they don’t interfere. A fun read.

Betrothed to the Beast: A Scottish Medieval Historical Romance

Before Journey's End: A Memoir