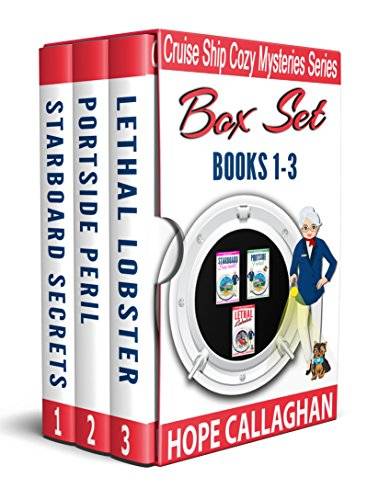 Treat yourself to books 1-3 in the ORIGINAL Cruise Ship Cozy Mystery Series!

★★★★★ "This series is awesome!!
I loved the first three books in the Cruise Ship Cozy Mysteries. I love the characters. The twist and turns in the plot were great. I definitely recommend this series. I'm on to the next book."-Elizabeth O.

Millie Sanders’ happily ever after is suddenly destroyed when her husband of 35 years comes home one day and informs her that he is leaving her for another woman. To make matters worse, the other woman happens to be her “friend” and hairdresser, Delilah Osborne!

After months of mourning and moping around the house, she stumbles upon a help wanted ad in the newspaper for the perfect job as an assistant cruise ship director. Before Millie can talk herself out of it, she fills out the application and mails it in. Much to her surprise, not only does the company contact her, they hire her!

Determined to start a new life and new career, Millie boards the ship, ready for a new adventure. She isn’t on board the massive floating city - her new home - more than ten minutes when a dead body is discovered near the atrium bar.

Her curiosity gets the best of her and before she knows it, Millie finds herself right in the thick of the investigation. With a little help from a new friend and shipmate, the amateur sleuth discovers that the deceased had more enemies than friends making this murder an even tougher case to crack.

Will Millie delve too deeply and risk losing her job – and possibly her life?

Millie Sanders has settled into her new position as assistant cruise director of the Siren of the Seas and is loving every minute of the adventure and excitement.

A fresh wave of passengers have just boarded, and as the deck party gets into full swing, a frantic cry of man overboard is shouted over the loudspeakers.

Millie rushes towards the crowd that has gathered on the portside upper deck and watches in horror as the ship's crew desperately tries to save a young man who has just gone over.

Onboard investigators believe it’s a clear cut case of vacation suicide, but Millie isn’t convinced. Her suspicions are confirmed when she discovers the fiancé of the poor deceased man received a threatening note.

The mystery deepens and the list of suspects grows when Millie discovers some of the friends who boarded with the young couple may have had reason to push him over, and that is just the beginning!

Assistant Cruise Director, Millie Sanders' day is off to a shockingly bad start when her boss “volunteers” her to be his Guinea pig for a stun gun self-defense class in front of her fellow shipmates. Loyal to a fault, she agrees but almost immediately regrets her decision.

Meanwhile, several crew members have become violently ill and possibly on the verge of death after eating food prepared from the galley kitchen, operated by her best friend, Annette Delacroix. It soon becomes clear that someone is out to sabotage her friend and may be willing to go as far as murder.

Millie dives in to the new mystery head first as she and her friend, Cat, try to salvage Annette's career and stop the saboteur before someone is murdered - or is it already too late?

Ritual : The Lord of Misrule #1 (The Paranormal World)