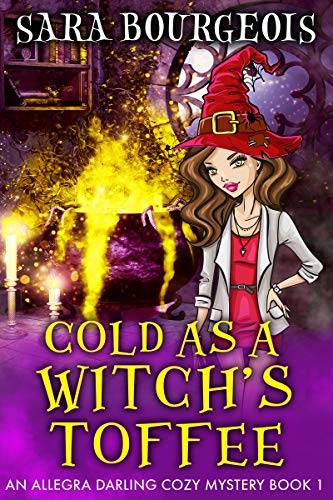 When Allegra Darling, star fitness instructor, inherits an ice cream shop from her Uncle, she is shocked, appalled, and at a loss. Allegra Darling doesn’t eat carbs, and she won't be caught dead selling them. When she goes to the little town of Knox Hills to sell the property, her Uncle’s attorney gives her the absolute worst news possible. She can’t sell the shop. If she does, she loses her entire inheritance.

Things get even worse when her stockbroker fiancé breaks up with her over email… for a plus-size model. Distraught, Allegra goes to the ice cream shop and devours an entire tub of Toffee Twist ice cream. Unable to move, she sleeps on the floor in a puddle of her tears mixed with the last shreds of her dignity.

Allegra is in for a huge shock the next morning when she wakes up to find her Uncle’s lawyer dead in the shop. What was he doing there? Who killed him? How is Allegra going to prove to the town of Knox Hills she didn’t murder him? After all, everyone saw her fighting with him the day before.

But, that’s not the biggest surprise. Something happens to Allegra when she moves into her Uncle’s old house. Magic she’d forgotten comes alive inside of her when she steps inside her childhood refuge. She’ll have to harness her new powers and find a way to solve the crime one spell at a time.
Cold as a Witch's Toffee is the first book in An Allegra Darling Cozy Mystery Series. It is a clean read suitable for all ages.
Paranormal & Urban Fantasy Cozy Animal Mystery

30 Words: That Will Change Your Life

His Sweet Arrangement: A Sweet, Clean Cowboy Marriage of Convenience

Into the Lion's Den: (A Christian Amateur Sleuth Mystery)