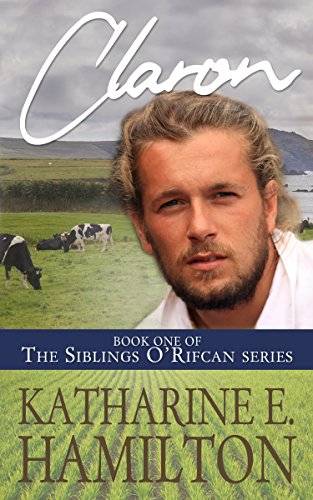 Tossing her belongings into a suitcase and escaping heartbreak seemed like the best idea for Rhea Conners. She’d simply travel across the ocean to visit her grandfather in Ireland and heal. Then she’d come back. Simple. But what she doesn’t expect is to find solace and healing in the form of the O’Rifcan family. One member in particular: Claron.

Claron enjoyed his life farming the land his grandparents gifted him. He lived his life quietly and contentedly, until Rhea arrived. He’d steered clear of relationships and entanglements since his last heartbreak, but something about Roland’s granddaughter twists him up inside. Something about Rhea has him rethinking his life of solitude.

Two hearts. One chance. Can Rhea and Claron overcome past hurts to make a new beginning?

I couldn't get past the sample.

Take this for what you will,like I say in my title I couldn't get past the sample.I started off
looking at a few reviews in the three star section, to me the three star reviews are usually
the best because they are middle ground. They didn't love it or hate it and they usually aren't trying to sway you one way or the other ,just telling you how they felt. I mention this only because other being told repeatably by many they thought it was a bit long and drawn out,I saw one say how they felt there was manufactured drama on the heroine's part to draw things out.
I hate stuff like that but I didn't think I'd see hints to that in just a sample.
Wrong.
Props to all who could stick it out for a whole book w/the heroine. For me she seemed like work
almost from the moment she's on the page. I loved the of the premise. Meeting some off on work
or vacation,meeting someone wonderful/awesome and getting overwhelmed and spooked by how
serious it could sudden;y feel,seeing how much this person you just met can or will change your life ?
Yeah,I can see how someone might run. Run far. Run fast! But the moment she basically is telling us
she's running because a relationship w/seemingly great isn't on her "to do list" or it's not one of her current goals ? I was like W. T. F. ?!?!?! Huh ?!?!?
That's weak. No, discussion. No let's re group and see how things go ? Just running away and shutting it down every time it even begins to cross her mind ? What ?
Put that with not giving us even a hint or taste in a prologue or anything to show us what things were like 5 wks. prior when they were together?
Nothing to give us a feel for them during the short time they were together ?
Why ?
How am I supposed to be invested in something so far after the fact, When A) She starts out so stiff she
doesn't know how to handle her father NOT dressed in a suit ?
B)Your dropping her into the middle of what feels like a family reunion like five seconds after arriving back in the states after almost a day of traveling ? It sounds all sweet and banana pudding and pralines,
but dropping someone into a house full of strangers when she had to be exhausted felt kinda mean and selfish. To her and to a silly newbie to the series who was taking a chance on a free book.
Most writers will do at least some recapping in case a reader is silly or foolish or what ever enough to do
this. I honestly didn't see it was Book 10 at first.
But this felt like story by committee, You know where the book is overflowing w.so many characters ,the supposed MC's of the story seem to get lost in the shuffle. That's never good but in a "romance",it's worse.
The "H" seemed ok,if a little weak,my main take w/him was how he already seemed overwhelmed by others and almost crowded out already. And he had me pity on having to have a heroine who definitely seemed to need a stick removed from a certain place before she was going to be bearable at all.

Thank you.
Just needed to get this out, it was bugging me.

I liked all 5 books. I got the audio books and was very disappointed in the person reading it. I have friends all around Ireland all with different accents but he did not do justice to them. The women all sound whining. They should have used someone else maybe the women who does The O'Brien series by Stacey Reynolds or the one who did The Tour by Jean Grainger. Don't waste money on the audio.

Perfect. Just perfect beautiful clean love story. Beautiful characters development. The author gave very good and detailed description of places in Ireland, which makes you want to live there for sure.

Loved this book! The O’Rifcan clad drag you in and make you long to be a part of their big family! Rhea and Claron’s story is one that you don’t want to put down until the end!

Enjoyed it on my beach vacation. Easy read and can’t wait to read the rest of the series! Now I want to go to Ireland.

Wonderful story. I have always wanted to visit Ireland and the author gave me a good visual. I would recommend this book.

Books 2-5 are unavailable in kindle format but they are on kindle unlimited, so for a monthly fee you can read the rest of the series.
This is exactly why I am not a fan of kindle!

Super cute and laugh out loud funny. Characters are very relatable. Low angst, feel good story. No steam, kind of disappointing, but the family is interesting enough to keep the pages turning and want to know what happens in the next book. Will save to my wish list for the next time I need a warm and fuzzy love book.

Rising: After the Thaw