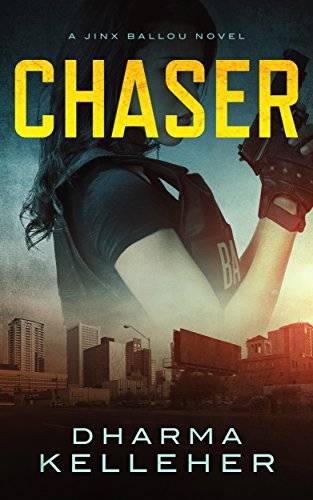 Bounty hunter Jinx Ballou’s pursuing a young murder suspect. But who’s hunting her?
After a major setback, Jinx Ballou is determined to prove she’s still one of the best bounty hunters in Phoenix, Arizona. To do that, she must track down Holly Schwartz, a teenage murder suspect. Should be easy, right?

But Holly’s been missing for weeks and other bounty hunters have already failed to locate her. Can Jinx track her down before time runs out?

Following a series of leads, Jinx uncovers a horrific truth, leading her to question whether Holly is really a vicious murderer or another victim in a much larger case. Just when Jinx thinks she’s found her young fugitive, the investigation puts her in the crosshairs of a ruthless gangster.

To survive long enough to return Holly to custody, Jinx must push her skills, her body, and her luck to the limit.

Fans of Stieg Larsson’s The Girl with the Dragon Tattoo and Michael Connelly’s Harry Bosch series will love this gritty, fast-paced thriller. Its refreshingly unique characters and non-stop, heart-pounding action make it impossible to put down.

“Dharma Kelleher’s Chaser is a hell of a good time.“
—ToughCrime.com

"Dharma Kelleher has created one of the most unique characters in crime fiction."
—Renee James, author of the Bobbi Logan thriller series

"With Chaser, Dharma Kelleher breaks new ground and breathes new life into a great genre."
—Greg Barth, author of Selena noir series
“A woman who writes ‘Crime Fiction From a Trans/Queer Perspective,’ with a kick-ass transgender heroine? Oh, I so need to read this!”
—Sally Bend, Bending the Bookshelf

The Cottage of New Beginnings: The perfect cosy and feel-good romance to curl up with

The Rose Kiss: Beauty and the Beast Retold