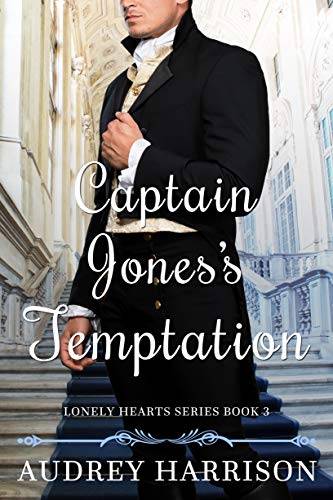 He has it all – or so it seems. She is hiding from her past. They both have to protect a child. Can they overcome their mutual dislike to battle the common enemy? Will their secrets destroy their carefully crafted lives? Captain Samuel Jones is handsome, charming – when he wants to be – and one of the highly coveted King’s Messengers. Sent on an assignment he resents, he clashes with the owner of the establishment he has to protect. Miss Esther Hardy has worked hard to achieve respectability and standing in the local community. She never thought that an act of kindness would threaten everything she holds dear. Just when she thinks there is a chance of a happy future, events unfurl which threaten those she cares for the most. No one is going to be left unscathed…Captain Jones’s Temptation is a Regency romance topped with a generous dose of humour, action, and tears. If you like simmering chemistry, fast-paced adventures, and strong characters, then you'll love Audrey Harrison's Regency tale.Buy Captain Jones’s Temptation to find excitement and true love today!

How to Sell on Etsy: Etsy Shop Secrets to Sell Your Craft Online (How to Sell Online for Profit)

Crushing On Him: A Prequel in The Men of Summer Series