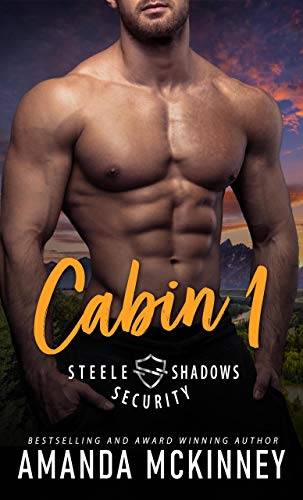 ★2020 National Readers’ Choice Award Finalist, 2020 HOLT Medallion Finalist★From bestselling and multi-award-winning romantic suspense author Amanda McKinney comes the first book in the steamy, edge-of-your-seat, three-part series, Steele Shadows Security…Hidden deep in the remote mountains of Berry Springs is a private security firm where some go to escape, and others find exactly what they’ve been looking for.Welcome to Cabin 1, Cabin 2, Cabin 3…Cocky, reckless, and die-hard playboy are just a few of the names Gage Steele has been called since he left the Marines and moved back to the small, southern town of Berry Springs to take over his father’s security firm. On the one-year anniversary of his father’s death, Gage has only two things in mind—endless whiskey and endless women. What he got was a battered, bruised spitfire stumbling through woods in the middle of the night.Newly-appointed prosecutor and unapologetic workaholic, Niki Avery has spent her life working toward one goal—never to have to depend on anyone but herself… until the day she gets brutally attacked on the side of the road. Stripped of her Louis Vuitton and her dignity, the fiercely independent ADA must submit to being under the watchful eye of a former Marine, a loose cannon with a temper as scorching as his looks.As cracks begin to show in the Steele family, including newly discovered evidence that their father’s death was no accident, Gage wrestles with his growing feelings for his client, knowing not only that Niki is off-limits, but together, they were like gasoline and fire—an explosion he wanted nothing more than to ignite in the bedroom. But when a pair of bloody body parts show up at the compound, it becomes clear that Niki’s attacker hasn’t given up and Gage realizes he’ll do anything to keep her safe… even as his own family is spiraling out of control.Cabin 1 is the first book in the 3-part Berry Springs spinoff series, STEELE SHADOWS SECURITY—Think of it as Berry Springs' darker, grittier, steamier, BAD BOY brother. Please note: You do not need to read the Berry Springs Series first.
★Awards and Recognition:★
CABIN 1 (STEELE SHADOWS SECURITY): 2020 National Readers’ Choice Award Finalist, 2020 HOLT Medallion Finalist.
THE STORM (A BERRY SPRINGS NOVEL): 2018 Golden Leaf Winner for Romantic Suspense, 2018 Maggie Award for Excellence Finalist, 2018 Silver Falchion Finalist, 2018 Beverley Finalist, 2018 Passionate Plume Honorable Mention Recipient.
THE FOG (A BERRY SPRINGS NOVEL): 2019 Golden Quill Winner for Romantic Suspense, 2019 I Heart Indie Winner, 2019 Maggie Award for Excellence Finalist, 2019 Stiletto Award Finalist, 2019 Book Buyers Best Finalist.
THE CAVE (A BERRY SPRINGS NOVEL): 2020 Book Buyers Best Finalist, 2020 Carla Crown Jewel Finalist.

Talking with the Dead

The Silent Daughter: A gripping pageturner of family secrets, with a twist you won't see coming