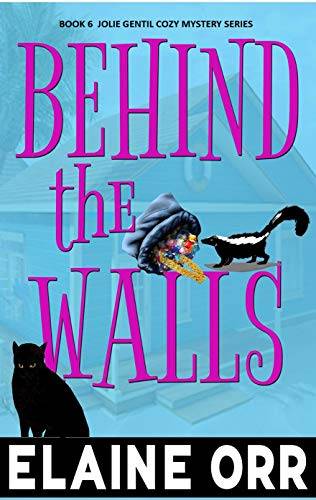 There’s something hidden behind the walls of the hurricane damaged house Jolie bought in her New Jersey beach town. Something someone seems willing to kill for. After Jolie and Scoobie find a small sack of jewelry as they do a mold attack on her bungalow, Jolie is pursued by a purse thief and a burglar. But the guy she’s most worried about is the one who left an elderly auctioneer dead on her porch swing. In between appraising houses and planning a fundraiser for the food pantry (can you say liquid string contest?), Jolie tries to figure out if there is more stolen bounty around town. Is the feared killer the same person who burned some vacant houses, or the as-yet unmasked Peeping Tom? And are they willing to kill again to get to the hidden riches?
Her friends and local police warn her to butt out, but that’s just encouragement for a woman who likes to get to the bottom of things. Jolie wrestles with fear as she tries to get her cat, Jazz, to feel at home in the new house. Maybe an unexpected visitor can be a substitute for Aunt Madge’s golden retrievers.
And then there’s her love life. Jolie also needs to decide if she really wants to get back with her former boyfriend, Ocean Alley Press reporter George Winters. Or are feelings for someone else trying to get her attention?