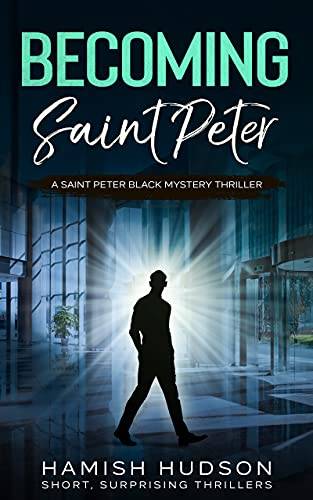 The grass isn’t always greener on the other side...
Peter Black is considered to be a saint. He’s the CEO of a respectable investment firm and a generous philanthropist. But Peter is no saint. He’s a master manipulator, hiding behind a mask of professionalism.

Peter grew up in foster care with this twin brother, John. They inherited different traits from their abusive, alcoholic father. Peter is a sociopath, and John is an alcoholic down and out.

When Peter dies in a car crash, John snatches the opportunity to get a better life. He becomes Saint Peter.

Overcoming addiction, acting a new persona, and battling remorse, John struggles to conceal his true identity from the intuitive and enchanting Cassandra Rose. When cocaine snorting property developer, Ray Woods, wants to scam the government out of millions, John discovers that nothing is what it appears.

Is John shrewd enough to play the role of Saint Peter?
If you like Jeff Carson, John Stanford, Vince Flynn, Jack Higgins, Agatha Christie, or Alistair MacLean, then you’ll enjoy the Saint Peter Back mystery-thriller series.

What readers say“A captivating thriller with a great twist. An ingenious plot with characters that move the story along at a magnificent pace … It reads like a movie plot!” (LM)
“Really, really enjoyed ‘Becoming Saint Peter’. It’s a gripping storyline and a thrilling read which kept me turning the pages to the end. I can’t wait for the next instalment of Saint Peter Black!” (CW)
“A well-written tale. Excellent storyline with a good twist.” (WK)
“The series is developing beautifully. Is ‘Peter Black’ clever enough to be Peter Black?” (BG)
“Hamish Hudson is going from strength to strength, delivering another gripping, tightly plotted thriller. An excellent read.” (JF)
“Fast paced with a flavour of gritty reality.” (MR)
“Just read your story and really enjoyed it. Liked the plot and didn’t see the twist coming at the end.” (IB)
“I whizzed through your thriller with no filler and loved it. A fast paced read, which gets you straight to the action.” (TA)
“Your descriptions of their traumatic childhood really made me empathise with the characters. I like how you introduced the death of one of the brothers at the beginning without saying too much because it had me hooked. Excellent twist at the end – it really added to the effect.” (JH)

What are you willing to do…..

How far would you go to have the life you’ve always dreamed of? To have the life your TWIN has. Well that’s part of what the author is going to put you through. There’s so many twists and turns, it’s hard to catch a breath. A very good read.

This book was a refreshing change from other mystery books I have read. Kept my interest all throughout the book. Brother imitating brother, but with a conscience.

This story of sibling rivalry takes a pretty unique direction and then takes it’s reader on a wild ride. You cannot help but feel for John Black and what he put up with from his brother Peter as they were growing up, and then when they are reunited as adults you can’t help but hate Peter. I would love to see what Mr. Hudson has in store for this series and Saint Peter going forward.

This is a very well written thriller that grabs your attention.

This is a great book - one believe is the first in a series. Focuses on two young men who are identical twins. They were raised as orphans, went they were fostered out of the care system they went two different ways - one a philanthropist and o into drugs and alcohol - then one dies - and I will let you read the story for the rest- but this is a great story line and the author has taken her time to put pen to paper - the writing is artfully created with many twist and turns to her dialogue - "are they really meaning what they are saying?" I will leave it up to you to dig out all the little tricks and crevices.

A great thriller with lots of suspense......recommend you try this first book of a series from an exciting author.....!

What a tale of twists and turns. I wasn't surprised by what happened at the wreck, but the rest was completely unexpected. I'll be anxious to read the next story.

...was played by Walter Johns