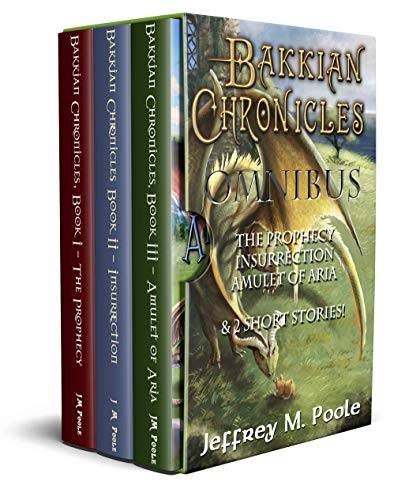 The ultimate epic fantasy collection! Every Bakkian Chronicles title bundled together in this one omnibus.

The Prophecy (#1)
Griffins, Dragons, and BNPs (Bugs of Nightmarish Proportions). Who knew? It seemed harmless enough. See a mysterious door and step through to see what happens, right? Now stranded in a magical kingdom, husband and wife search for a way home. However, enlisting the aid of the king and queen has given them their biggest shock yet: Royal Babysitters.

Some days it didn't pay to get out of bed.

Insurrection (#2)
Add one magic-stealing goblet, half a dozen dimwitted trolls, and one conceited wizard. Next add one kidnapped member of the royal family, one concerned son, two bodyguards, a soldier, and an adolescent griffin. Throw in a pinch of green dragon. Mix well and you will have yourself one fantastic action-packed fantasy adventure set in the magical kingdom of Lentari!

Amulet of Aria (#3)
Mikal is not safe. The sorceress Celestia has found a way to attack the prince on his bodyguards' world. Realizing this, Steve and Sarah escort Mikal back to Lentari to inform his parents.

Lentari is in turmoil. Dwarves are preparing for war. Dragon raids are on the rise. To keep Mikal out of Celestia's grasp a powerful amulet must be found.

Don't miss the exciting conclusion of the Bakkian Chronicles!

Winter Wonderland is a 7,200+ word short story that shows what happens when Mikal's parents visit the "Kingdom of Idaho" for the first time. Speeding snowmobiles and frenzied shopping sprees are just a few activities that await them!