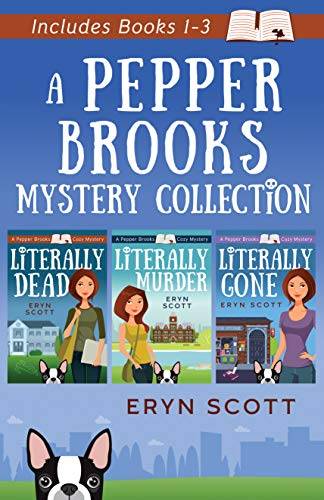 Readers, if you love classic literature, feel like there's nothing better than the smell of  books, see a library as a place of solace, and don't mind an adorable puppy named Hammy hanging around, you're going to love these books. Each book features a different classic author. ;) Happy reading!

To solve or not to solve?

When a visiting professor is found dead, English major Pepper Brooks is caught in the middle of the investigation. Literally. While the detectives focus on crime scene forensics, Pepper can't ignore the Shakespearian clues left by the killer.

With the help of a handsome library clerk, a dog named Hamburger, and the words of The Bard himself, this unlikely sleuth might just close the book on this case.

A Farewell to Blondes

When a young woman shows up dead in Campus Creek, amateur sleuth Pepper Brooks is warned not to get involved. She's fine with that. It's her final quarter of college, she's immersed in Hemingway and planning her future. Plus, things are already complicated enough trying to figure out where everything stands with Alex, her maybe-boyfriend.

But when two more fair-haired women show up drowned, Pepper literally can't stay away. Especially when her best friend may be the next one For Whom the Bell Tolls.

It is a truth universally acknowledged that an overly inflated ego must be in want of the spotlight.

When the actor set to play Mr. Darcy is found murdered in his dressing room, Pine Crest's annual AustenFest is derailed. Pepper Brooks must set her pride and prejudice aside to differentiate between rumor and truth as she searches for the killer.

Between running her new bookstore and trying to decide who is a Darcy and who is a Wickham, Pepper quickly finds that her story might not end as happily as those written by Jane Austen.
Cozy Animal Mystery Mystery Anthologies

King: A World of Tease Novel